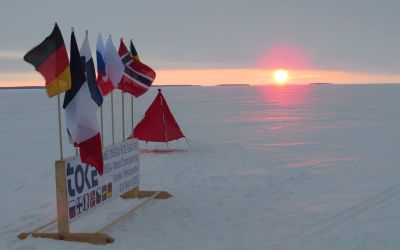 WHO IS THE FIRST AT TOKE?

A bit more than three months is left before the start of the most unpredictable race of the winter, international kite marathon “Trans-Onego”.


This is a three days autonomous race with two independent night stops in campain conditions on the ice of Onego lake for teams of two persons. An important term of the marathon is that the participants transport their racing and campaign equipment on their own autonomously on the whole distance. Last year there were 31 teams from 7 countries who went on start: Russia (all regions), Germany, Norway, France, Finland, Sweden, Check Republic. For the moment there are 21 teams who have applied for participation: Russia, Danmark and Finland. Among the participants there are experienced conquerers of the vasts of lake Onego, as well as those who will get acquaited with Onego water area for the first time.

Many new wonderous discoveries are waiting for the guests from Danmark, the team “Beckett Brothers”. Andres and Tomas have been going in for snowkiting for several years in Norway and have many times gone to the mountains getting over the most well-known tops of the world such as Elbrus, McKinley etc. And if Dannish brothers stay the “dark horses”, Franco-Finnish team “Snowkite Angels” consisting of Cristelle and Raimo Selen may appear a serious competitor.

As for russian-speaking participants of the race, the greatest fight is to happen between them. Here is the team SHEKSNA (Vladimir Lukianov and Sergey Poskakukhin), the second prize winners of TOKE 2016. And there is the team which took the fourth place, “Sky-Country” people Maksim Maksimov and Kirill Litvinov. Certainly the representatives of the team POLAR CORMORANTS, who are always among the top ten, Kirill Korabelnikov and Dmitry Smurov, will go for their point improvement. There is one more team with a good opportunity to express themselves, Red Arrow (Dmitry Nikuichev and Sergey Malyshev).

However, all is only beginning: the applications are sti welcome and kiters from all over the world have a chance to tell about themselves and fight for going to the stage of Varanger Arctic Kite Expedition (VAKE) in Norway. By the way the organizers of #SNOWKITERUSSIA2017 are inviting the participants of the two competitions WISSA Championship and and TOKE kiting marathon to take part in motor race “From Sea to Sea” (February 27-28). As a bonus there is free delivery of equipment from Zhiguli Sea to Onego.